What You Do Next 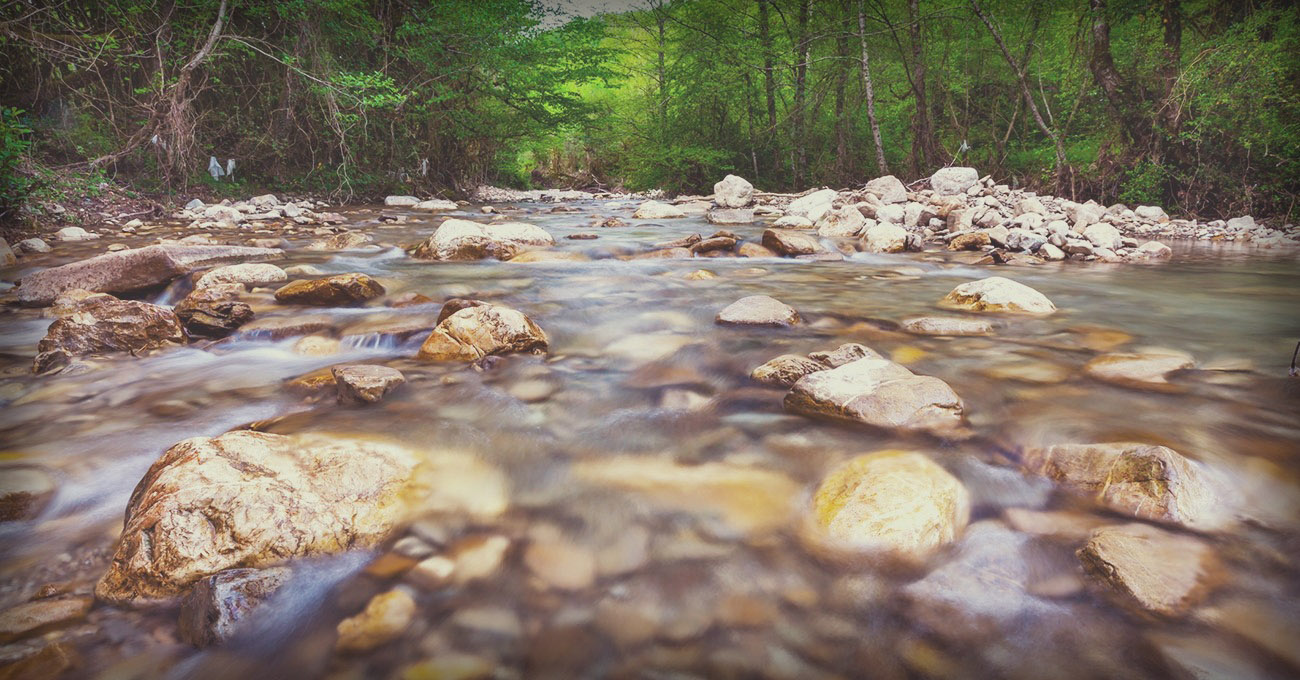 Something funny happened at a nearby reservoir this weekend.

Before I can tell you that story, though, I need to first tell you a story about another thing that happened one summer at the same grassy park I wrote about last week. which is nestled along three blocks of Main Street in the small town I grew up in.

Fortunately for me, it was also located right across the street from the house I lived in from age ten on.

What I didn’t mention last week was that along the other side of the park are some woods that slope up steeply (a topic for another day). And that between the playground and those woods is a creek.

Of course, nobody I knew growing up ever called it a creek.

Because we all called it The Crick.

To be honest, I’m not sure why we called it that. After all, we were living in New Jersey, not back woods Kentucky. But like I said, it was a small town, very rural. Cows and corn country. Which made it easy sometimes to forget that we were only a stone’s throw from both New York City and Philadelphia.

The Crick is basically what you’d expect if you’ve ever seen a creek. It sat at the bottom of a gully maybe six feet wide and a few feet lower than the level of the playground. And depending on how much rain we’d seen recently, it could range anywhere from teeming with rushing water to being bone dry.

My memory is that most of the time, it held about six inches of water and moved along briskly over and through a miniature glacial landscape of assorted rocks. Under and around these rocks lived frogs (or tadpoles depending on the time of year), turtles, snakes, crayfish, water skippers, and a variety of other wildlife that I spent countless hours discovering and observing (and even befriending) back in the day.

The dilemma, of course, was that my mother expressly forbade us from ever playing in The Crick.

The house we lived in at the time was the same one she’d grown up in herself. So I always suspected she was privy to some horror stories about kids falling into that gully and cracking their heads open … or maybe somebody who almost drowned in it when the water level was high. But if so, she never shared them. Just told us to stay away from it.

Which pretty much guaranteed it would be the one thing I wanted to do most of all in life. So I did. But being a kid, and therefore reckless, I wasn’t always so great at covering my tracks about it.

“Why are your jeans muddy?” she’d ask.

“Were you playing in The Crick again?”

“Me? No. I was playing … on the monkey bars. And I fell. And there was a puddle. So I guess I fell into the puddle?”

“You guess you did?”

“No, I did. I definitely fell into the puddle.”

She never bought it, of course. But what was she going to do? Shy bookworm that I was, she had a hard enough time getting me to leave the house most days. “Go outside and blow the stink off of you!” was a common refrain in our house. So if she banned me from going to the park, and potentially to The Crick, then she’d have to deal with me withering away (and presumably getting stinky) in front of the TV or in my room all day long.

The only time I ever really overplayed my hand was the day somebody dared me to jump over The Crick.

To paint a picture of this, at the farthest end, just before the spot where it fed into a large sewer pipe and was presumably sent to the river a few blocks away, The Crick was much deeper than usual. Deep enough that fish could live in it.

Being able to jump over this section was practically a rite of passage for kids in our town. I’d managed to dodge it for a while, because I was short for my age. But then one summer, somebody (probably the same friend who got me into that fight) dared me to, and so the time had come to prove my mettle.

After all, I thought, how hard could it be? The water itself wasn’t more than a few feet wide. Certainly I had jumped that far in our yard before, or in the house, during a rousing game of The Floor is Lava.

And so, as everybody watched, I took a running start, planted my foot just before the edge of the water, pushed off, and flew into the air.

In my head, it all happened in slow motion. Me soaring over the surface of the water, watching it pass beneath me, thinking, “I’m doing it! I’m like Evel Knievel! I’m going to make it!” 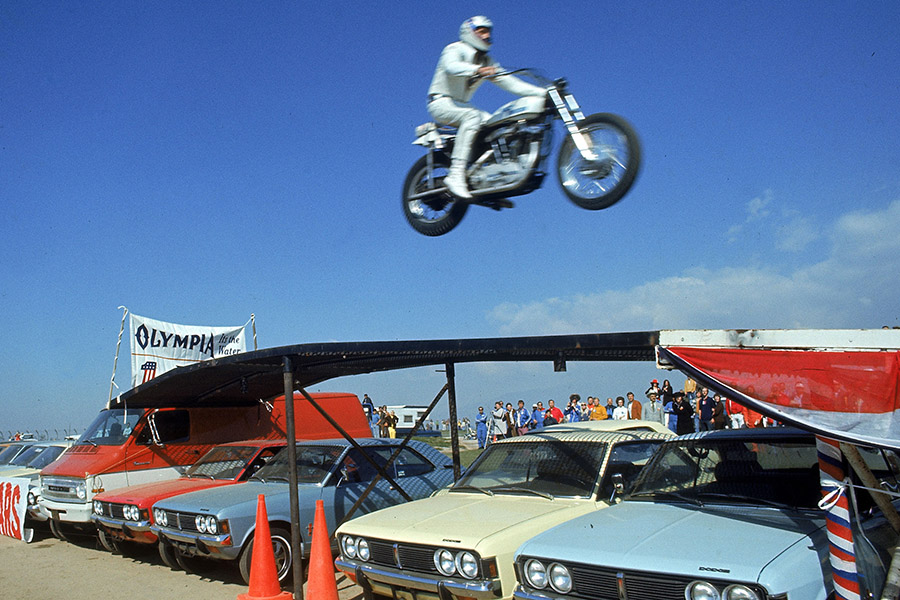 And make it I did. Unlike Evel Knievel trying (and failing) to jump the Snake River Canyon in a rocket bike, I easily cleared The Crick, and landed on the other side.

That was the good part.

The bad part was that it had rained recently, making the ground on the other side somewhat … soft.

Which meant that with all the momentum behind my successful jump, when I landed, my Keds-covered feet promptly sank ankle deep in thick mud, which grabbed and held onto my feet, making it hard to find my balance. My body first tried lurching forward, realized my knees didn’t bend that way, then backward, until I was suddenly sitting on the ground with my butt half in The Crick and half in mud.

At this point in the story, we’ll just fast forward past how hilarious this was for the kids who were watching, and cut to the part where my first thought was, “Shit. There’s no way Mom is going to believe this was me falling into a puddle.”

Fortunately, since she was working that day, there was no reason she ever had to find out about it. After freeing my feet from the mud, I walked home, took the sneakers and jeans off, hosed them down in the yard, let them dry there in the sun, and later buried the jeans deep in the hamper.

Then waited for my mother to say something.

But if she ever figured out what happened (and let’s face it, she probably did), she never let me know about it.

I hadn’t thought about this particular incident for decades, until this weekend, when my partner and her son and I took advantage of the lovely weather to drive to a nearby reservoir for a scenic hike.

For whatever reason having to do with reservoirs, when we finished our walk from the road through the woods to the water, the edge of it was a good twenty feet further away than we expected. I don’t think reservoirs are affected by tides, so maybe they had released water from it that day? In any event, it meant there was quite a bit of soft, muddy ground to cover before we reached the water.

Walking gently, we managed to only get our shoes a little dirty as we navigated our way to a line of rocks, then used these and some grassy patches to work our way up the shoreline.

An hour later, when we were ready to head back to the woods and to our car, my partner’s son was feeling brave, and so ran out ahead of us. We didn’t think much about it until a few minutes later, when we happened to see him standing on the row of rocks, looking distressed.

Then, as we grew closer, we could see that he wasn’t wearing any shoes. Only his socks.

As we grew closer still, he said to us something like, “I think I might have been a little too confident.”

Confused, we glanced over at the wide patch of mud that ran alongside the rocks. What we saw there was a line of footprints in the mud, inside two of which were his sneakers. Then another shallower set of prints that led to where he was now standing on the rocks.

But as I suddenly flashed back to my own encounter with getting stuck in the mud some decades before, I could understand how it might happen. You make a plan, you move ahead (or jump in my case), and realize too late that maybe you didn’t have all the information you needed. Next thing you know, you’re ankle deep in mud.

The challenge in this case, of course, was figuring out how to get his sneakers back without getting stuck ourselves.

Fortunately, this kind of thing is where my MacGyver instincts come in handy.

I pictured in my mind all the times I had navigated the waters of The Crick by walking from one big rock to another. Then I grabbed one of the bigger rocks I was standing on, picked it up, and tossed it into the mud near the sneakers. Then another. And another.

The photo below tells the rest of the story.

At this point, my partner simply walked across the stones to get to the sneakers and back.

“So what does that have to do with the price of tea in China?” as my mother might ask.

Well, when we’re stuck in the mud, whether it’s literal or figurative, this is what moving forward looks like sometimes. Pulling the camera way back, remembering all of the challenges we’ve overcome in the past, and then finding a way to apply those to the situation at hand.

Because getting stuck in the mud happens. The reasons why aren’t important.

It doesn’t matter that your mother told you a hundred times not to play in The Crick. Or that you got too confident and ran too fast. Or that maybe you took a chance on something for your business that seemed like a good idea at the time but didn’t quite pan out. Or that a global pandemic came along and screwed your entire year up.

What matters is what you do next with the materials at hand.

With any luck, you have people like that in your life already. People who look at things differently than you do, and who see opportunities where you see obstacles.

But if you don’t, and if you need somebody to throw a few rocks in the mud for you, then drop me a line.

JOIN THE TRIBE!
Of Turtles and Tutors and Crossing the Streams
Sometimes working with friends and family can be the wrong call, because the stories we tell people ...
Your Story. It's What's for Dinner.
Making time to find and plan and tell the story of your business can feel the way it does to put tho...
The Six-Question Story: WHO?
When we start walking down the road of telling the story of our business, we should remember to ask ...
Where Does Your Business Story Begin?
In order to first understand and then tell the story of our business, it helps to mark where it all ...
Stories Interrupted ... and the Grief That Follows
With all the logistical inconveniences caused by the coronavirus, it's easy to forget that many out ...