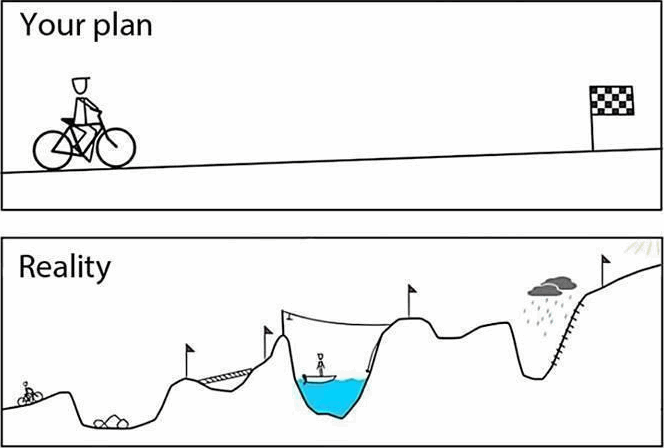 A few weeks ago, somebody on my LinkedIn feed posted this meme, which has been making the rounds on the internet for years now, in blog posts and on social media. It illustrates the difference between “your plan” and Reality.

Most people who see this for the first time either chuckle or groan. Maybe both. The professionals out there who are in charge of project management mostly groan. Because it speaks a truth about how Reality tends to get in the way of things like planning and deadlines and budget caps.

Scottish poet Robbie Burns painted a similar picture to this one, but with words, more than 200 years ago. In one of his poems, a farmer talks to a mouse that he’s just unintentionally frightened out of its cozy home by running through it with a plow.

Here’s a de-Scottished version of two stanzas from that poem:

Now you are turned out, for all your trouble,
Without house or holding,
To endure the winter’s sleety dribble,
And hoar-frost cold.

But Mouse, you are not alone,
In proving foresight may be vain:
The best-laid schemes of mice and men
Go often askew,
And leave us nothing but grief and pain,
For promised joy!

You’ve probably heard some version of those two bolded lines quoted at some point. They were even the inspiration for the title of one of John Steinbeck’s most famous novels, Of Mice and Men.

For businesses and people, making plans is always a risky proposition. Because of course we can’t predict the future. And as we’ve all learned this year, the kinds of things we can’t possibly know in advance are potentially more far-reaching than simply bad weather or market fluctuations or consumer buying trends.

Faced with this, it’s easy to look at Reality as the enemy. To view it as the party crasher who shows up and pours a giant bucket of water on everything, sending people home soggy and dissatisfied.

Why can’t Reality ever just let us have fun? Why can’t things be easy? Why can’t we pedal our bicycle casually to the finish line, then enjoy the rewards of our efforts without all the drama and complications?

But who wants to hear that story?

One of the oldest and most well-known tales in the Western world is Homer’s Odyssey. It’s an epic poem that chronicles the adventures of a soldier/king from Greece who encounters any number of monstrous and magical obstacles while trying to return home to his wife and son after fighting in the Trojan War.

Let’s face it, though. If the story of Odysseus was that “he left Troy and sailed directly home,” nobody would have cared about it, much less translated it dozens of times over the past two millennia.

That’s because it’s the unexpected and inconvenient bits that make things interesting.

It’s human nature to become more engaged when faced with a story about somebody (or some business) overcoming slim odds, surmounting formidable obstacles, or rising to face a daunting challenge.

Well, most likely it’s because when we see or hear about or read the details of somebody else (real or fictional) going head to head with Reality and winning, we project their success onto ourselves. We identify with the protagonist and see ourselves in them. Which then gives us permission to succeed too, and makes us feel a little better about the fact that our own plans may have “gone askew.”

So if your small or freelance business has managed to achieve its goals in spite of unexpected challenges, then you should consider sharing that story with others. Not in a boastful way, of course, but generously. Show your clients and the others out there what’s possible.

What’s more, when you tell that story of how you reached the finish line and achieved your planned goals by the less direct route, don’t be stingy with the details. Because the same steps you took might be ones that wouldn’t ever occur to other businesses.

And in the current climate, with Reality crashing down around our ears in new and exciting ways from one day to the next, we can each use all the extra inspiration we can get.

JOIN THE TRIBE!
Are You Afraid to Talk About Yourself?
There seems to be a misconception these days that talking about ourselves on our own websites is bad...
The Six-Question Story: HOW?
What we tell people about the “how” of our business matters, and goes a long way toward helping futu...
Story Winner: Westport Farmers' Market
I’m starting a feature called “Story Winners,” in which I’ll feature the About page of a business th...
Stories Interrupted ... and the Grief That Follows
With all the logistical inconveniences caused by the coronavirus, it's easy to forget that many out ...
Why Story Heller?
So how did I settle on the name Story Heller for this blog site? Well, it all starts with growing up...