The Sound of an Anvil Dropping 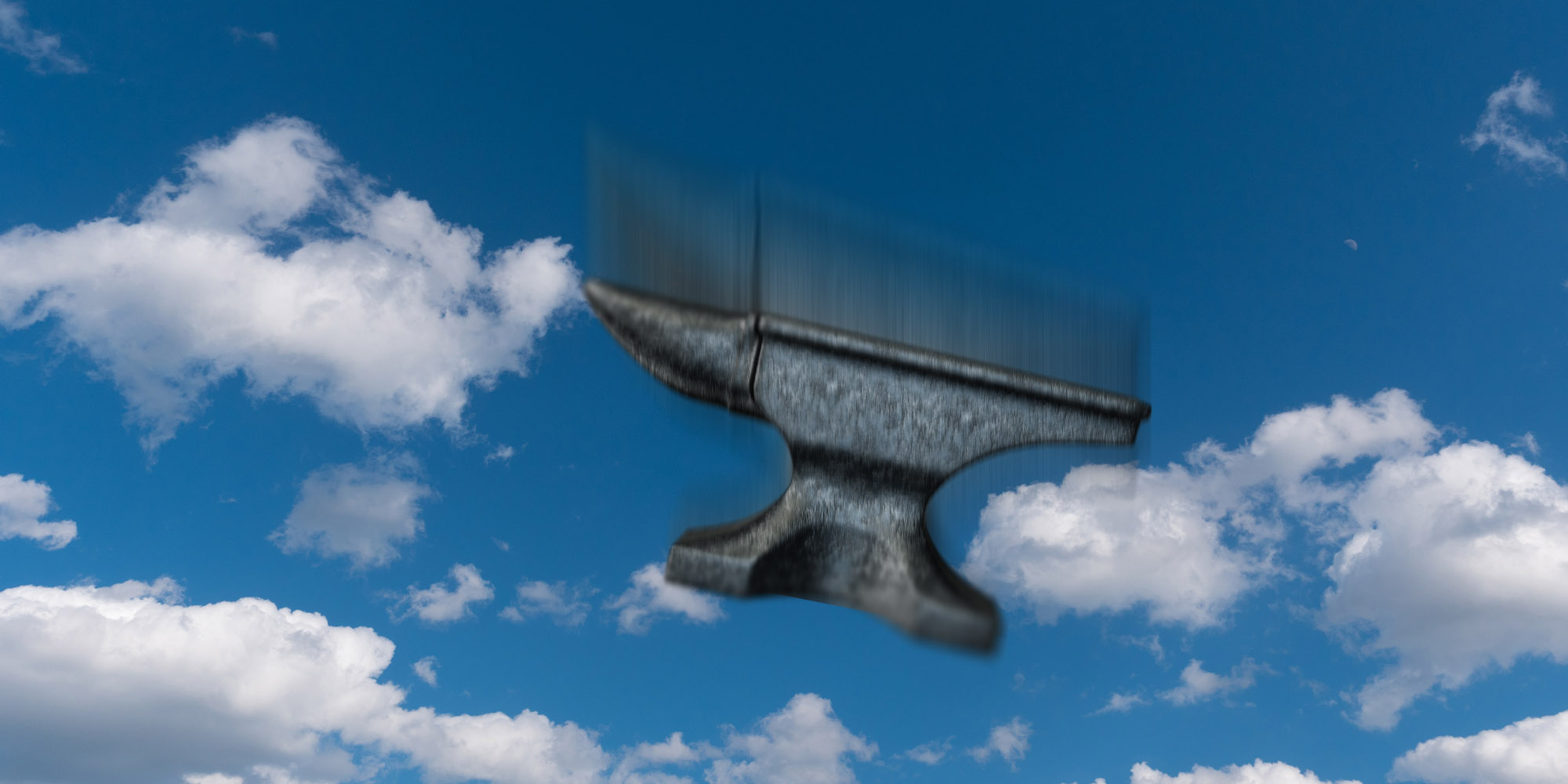 Late last night, after a long day, long week, and even longer month, with the family room to myself, I sat down and did something I haven’t done in a while. I started flipping around the TV channels.

Normally, when I do watch TV, it’s something available on demand, or that I’ve specifically recorded in advance. This makes it easier to control the amount of time I spend, and to do it at times that are most convenient for me.

But last night, for whatever reason, I felt the urge to take my chances. To step out of my bubble of preferences and choose from whatever was available.

What I landed on was something that took me back to my childhood.

It was some old Bugs Bunny cartoons. And when I say “old” here, I mean older even than me. These were cartoons created back in the 1940s and 50s, although I watched them in syndication (during pre-cable times) more than a couple of decades later. But I watched them A LOT.

In fact, I’ve probably seen every single “Looney Tunes” cartoon from that era at least a dozen times. Maybe more. In a contest between how many times I’ve seen these or every Brady Bunch episode, it would be a really tight race.

In many ways, Bugs Bunny shaped for me not only my sense of humor, but of what’s possible. And how a story doesn’t always have to make sense.

Case in point, in one of the shorts I watched last night, Bugs is trying to keep away from Yosemite Sam, who is a pirate, and who wants to kill Bugs because the rabbit knows where his treasure is buried. That’s the premise.

At one point, Bugs is up in the crow’s nest of Sam’s ship and refuses to come down. Eventually, he relents (or seems to), and says he’ll agree to jump down if the pirate will catch him. Sam says yes to this.

At the last second, Bugs reaches into the crow’s nest, picks up an anvil, and throws it over the side. Sam catches it and, the bizarre laws of Looney Tunes physics being what they are, the entire ship sinks into the ocean. All except the crow’s nest, of course, which still pokes up safely out of the water. 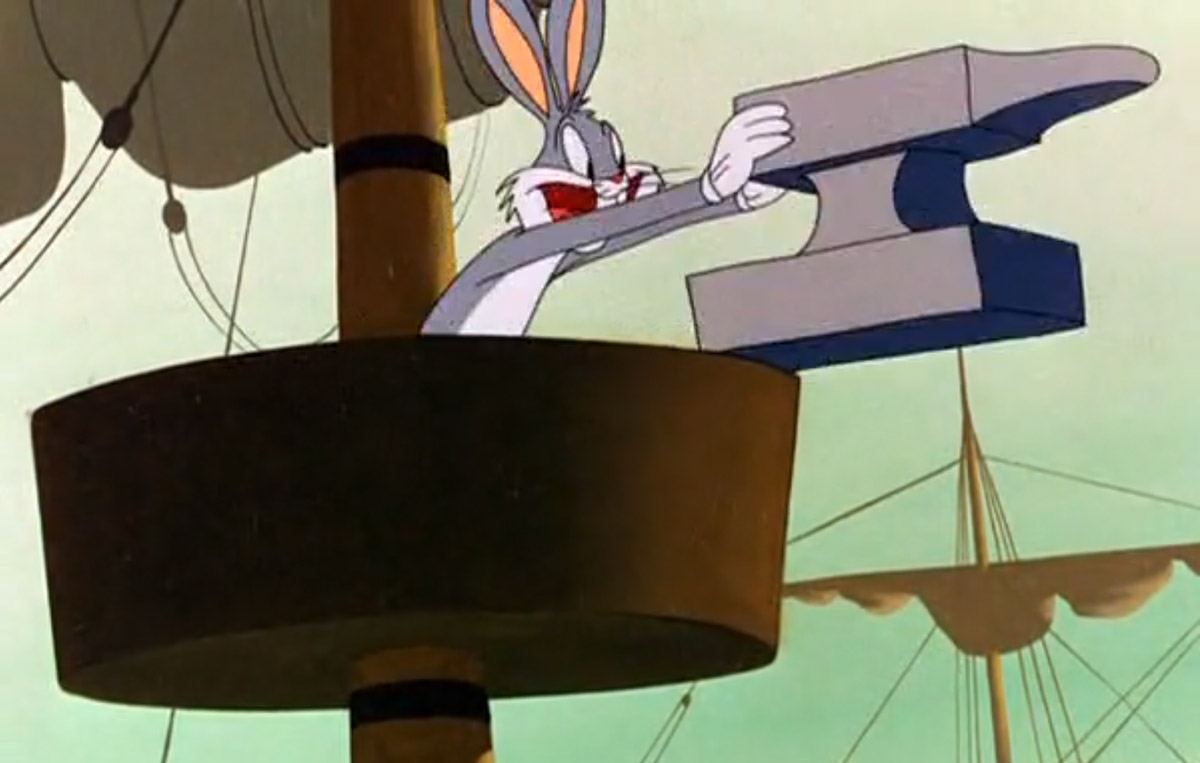 Okay, let’s rewind back there, in case you missed it …

Bugs Bunny picks up AN ANVIL. In the crow’s nest of a pirate ship.

Did I have any problem with this when I a kid? Did I even know what an anvil was, except for a heavy and humorous plot device frequently used by cartoon characters to drop on somebody’s head?

After all, everybody was pretty much driving cars by the 1970s and 80s, effectively putting blacksmiths and horseshoes (and even most horses) out of business. I’d probably never even seen an actual anvil in real life.

The “in-universe” explanation, of course, is that Bugs needed an anvil at that moment, and so there it was. In that regard, Bugs was always a bit of a wizard. It’s possible he went to Hogwarts with Dumbledore, but I can’t be certain.

Like me at the age that I watched those cartoons, Bugs was never the strongest or the fastest. But he was always the most imaginative.

In another short I watched last night, Bugs needed to keep the Tasmanian Devil from eating him. So after all other plans hadn’t done the trick, he pulled a phone out of a tree(!), called Tasmania, and placed a classified ad in the newspaper there for a female Tasmanian Devil looking for a husband.

A few seconds later, a plane flew in, dropped her off, Bugs conducted a hasty marriage ceremony in Devil-ese, and Taz and his lovely wife flew off in the plane a few seconds after that. Problem solved.

So how did Bugs find an anvil in a crow’s nest? Because why not?

What I learned from this is that in strange and stressful times, like when a pirate wants to kill you or a beast that can turn itself into a mini-tornado wants to eat you, a strong imagination can be your best (and maybe only) friend.

I’ve had to think about this with my own business lately. What can I do differently? What can I try that I’ve never tried before? And I know that many others out there, freelancers and small businesses, have had to do the same.

Grocery stores and restaurants have had to redefine how they help people get food. Companies that rely on live events have had to suddenly take a crash course on gathering large groups of people online. Schools and teachers have had to figure out how to teach children exclusively via Google Docs and Zoom calls.

Many of us are trying to find our Anvil Solution. Not just the little tweaks we can make, like working remotely instead of in an office. But the big, heavy solution that makes the stress go away.

WWBBD? What would Bugs Bunny do?

Bugs Bunny didn’t ask himself, “Why the heck would there be an anvil in a crow’s nest?” He just decided there was one, because he needed there to be one, and it was there.

Now, I’m by no means suggesting that having magical cartoon powers is the solution to anybody’s problems right now. If only. But we do all have access to imagination. To letting go of the old story and considering the possibilities of a new one.

And if we don’t have enough imagination ourselves, then we can always borrow some from other people. Our friends, family, employees, business partners, and the millions of people on social media are all teeming with imagination.

We just need to be willing to reach out to the Bugs Bunnies in our lives for help tapping into it.

Now … in case anybody thinks I’m making light of the current health crisis by talking about cartoons and cartoon solutions, it’s important to understand something …

Bugs Bunny debuted to movie theater audiences in 1938. That’s the same year Hitler marched into Austria. Which came after almost a decade of the Great Depression. It was during World War II that Bugs grew into the iconic character that has persisted in our collective memory ever since.

So besides the mindless humor offered by these cartoons, I found myself last night understanding a little better what the appeal of a Bugs Bunny must have been back then.

Faced with a world at war (with soldiers and tanks then rather than a coronavirus) and people dying and resources being rationed, here was this clever, wisecracking rabbit with a Bronx/Brooklyn accent, who (almost) always had a solution to whatever problem was facing him at the moment.

“If all else fails,” Bugs might say, “just drop an anvil on it.”

JOIN THE TRIBE!
Story Winner: Movia Robotics
I wasn't actually thrilled with the story being told on the website of this week's Story Winner, Mov...
Keeping My Shoes Dry
Too often, we can't control the obstacles that will inevitably land in our path. But maybe we can co...
In Search of Inciting Incidents
Where does a story begin? In Alice in Wonderland, the King of Hearts tells the White Rabbit to, “Beg...
Tell It, Don't Yell It
Are you telling your story? Or are you yelling it? If the story of your business is a strong one—if ...
Simple Plans Make for Boring Stories
When reality grabs hold of our best-laid plan and turns it into something so complicated that we can...